The Complete Official Road Guide of the Lincoln Highway:

State Highway, proclaimed by former Governor Carey, the Lincoln Highway. Much work has been done and still more is in contemplation. It is a much traveled[sic] route. The highest altitude reached 8,347 feet at Sherman Hill, where the Continental Divide is crossed. [sic] About 33 miles west of Cheyenne the tourist encounters the Ames monument at an elevation of about 8,300 feet.(1)

The town of Pine Bluffs has fared better than most, as it was skirted on the south by Interstate 80 in 1967. All buildings south of the Interstate were examined and determined to have dwellings built well after 1975. (3)

Egbert.
The town was named “for Dan and Augustus Egbert; a pair of railroad workers who selected this site for a station in 1868.” They returned to Batavia, Illinois sometime in the early 1900’s. (4)

The Hotel Egbert was constructed in 1908. The newspapers of the day reported that a large banquet was held in honor of its opening, the proprietors invited the cities of Cheyenne and Pine Bluffs to attend. A special train was arranged for transport to and from Cheyenne. The location of the original hotel is unknown. Egbert was once a thriving agricultural community with a school, church, grain elevator, lumber yard, bakery and the hotel.

Egbert today has a total of ten homes. Of these, only five appear to have people living in them. There is also a pair of small farms in the immediate area, and these too, are occupied. The original highway crossed the U.P.R.R. northwest of the town. This crossing was removed sometime around the first realignment of the Lincoln Highway, ca.1924.

Burns has always been an agricultural hub for Southeastern Wyoming.

This town isn’t listed in the 1915 guidebook, but the Union Pacific Railroad notes state the town has been existence since at least 1868. The Lincoln Highway was routed through here during its initial alignment, and, from all indications, remained a part of the trans-continental highway until at least 1924.

“On June 11, 1867, Lathrop Hills led a party of surveyors up the nearby Lodgepole Creek, staking out the location for the Union Pacific Railroad, the first transcontinental railroad. Hills was riding out front of the group when he was attacked by Indians and killed. Within minutes his men drove off the Indians and later reported they found 19 arrow wounds in his body. He was 35.” – From the invitation to the dedication of the Hillsdale Historical Marker, September 5th, 1973. (8)

“Hillsdale began to “boom” about 1913. The building of the Lincoln Highway did much to aid the growth of the town. Farmers were doing better now too. At this time a bank, newspaper, two hotels, three restaurants, two general stores, a lumber and hardware store, two churches, barber shop, grain elevator, and two garages did a thriving business. A dance hall, which also served as a place where movies were shown, was located in[sic] the second story of the implement store and did a flourishing business.” (8a) 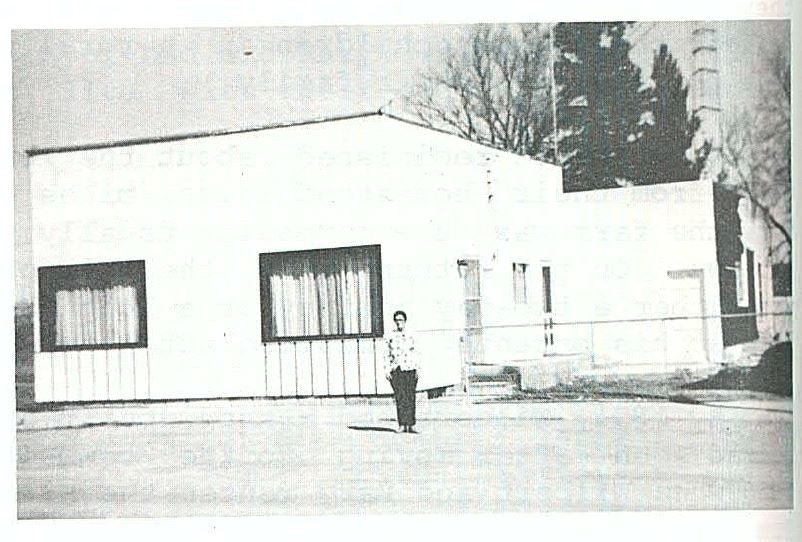 The building which housed the Hillsdale Post Office was remodeled in the early 1970’s. This photo was taken in 1975, the woman in the picture is the owner, Mary Hansen. (9)

“Railroad station for William Archer, [a] member of an engineering corps that was attacked by Indians when surveying for UP railroad in 1867; Archer was wounded but escaped.”(10)
UPRR: (No date) A new postoffice[sic] in Laramie county[sic] on the U.P.R.R. 8 miles east of Cheyenne, the county seat, and nearest banking point. No business. Altitude 6,012 feet. Population 20. “Named for a member of an engineer corps which was attacked by a group of Indians when the group was surveying for the UPRR in 1867.”(5)
1915 LHA: New York: 1980 miles. San Francisco: 1404 miles.
Pop. 15. Alt. 6,005 ft. Laramie County. No hotel, but meals and lodging can be obtained. Gas, 20c; Oil, 75c. Route marked through village and county. Extensive road improvements planned for 1915. Two good detour roads without mileage increase over L.H. One R.R., 1 Exp. Co., 1Tel. Co., 1 public school, 3 automobiles owned. Camp site. (1)

There was an experimental farm that UW had located here; it was established in conjunction with the United States Department of Agriculture. It was started July 1st, 1912, and was focused primarily on cereals, (wheat, oats, barley, flax and “minor grain crops”), in climatic conditions “applicable to a greater or less extent to northeastern Colorado, western Nebraska, a narrow portion of South Dakota and to eastern Wyoming.” (11)

William Archer was part of the team of surveyors who were attacked near Hillsdale. The correct name of the experimental farm was the Archer Field Station.

The structures in this image are not from the Archer Field Station but are from what would have been a nearby farm.

Today, the place where the Archer experimental farm has been transformed and is now home to the Laramie County Fairgrounds and Archer Recreational Complex.

1915 LHA: Note to Both East and West Bound Tourists.
West-bound: Here detour for Denver, Colorado, via Wellington (34 mi.), Ft. Collins (46 mi.), Loveland (59 mi.), and Longmont (78 mi.), to Denver (114 mi.). From Denver, many points of interest and natural beauty may be reached. Among them are: Colorado Springs, Garden-of-the-Gods, Pikes Peak, Estes Park, Long’s Peak, Cherokee Park, etc. If you plan to continue your journey to Pacific Coast points, return over the same route (which is by far the best) to Cheyenne. Detour at Cheyenne for Cherokee park (18 mi.). Follow the Blue band marking.
East-Bound: Here detour for Denver and Colorado points (see preceding paragraph for detail). If your plans contemplate proceeding east over The Lincoln Highway, two routes present themselves as follows: Return from Denver to Cheyenne (114 mi.) or proceed direct from Denver to Big Springs, Nebraska (227 mi.) via Fort Lupton, Greeley, Fort Morgan, Sterling, and Julesburg. Upon reaching either Cheyenne or Big Springs, proceed east following the route of The Lincoln Highway as shown in this Guide Book.
Between CHEYENNE and LARAMIE the tourist encounters much really excellent and naturally graveled roads.(1)

This station was named for an attorney who worked for the Union Pacific Railroad and was one of the first attorneys in the territory of Wyoming. William W. Corlett, (10Apr1842 – 22Jul1890) was one of the first attorneys to set up practice in the Wyoming territory in 1867, when “Cheyenne was a city of 500 to 600 people living in tents or under wagons.” W.W. Corlett served three terms as county attorney for Laramie County. (13)

After extensive research and study, it appears that Corlett Station has been lost to history.

The following images were made somewhere in Laramie County, on private property with the permission of the landowner. Please do not ask either the exact location or for the property owners name.

This station, (and later the road) was probably named in honor of an engineer or surveyor for the Union Pacific. To date, no records have been found to indicate the origin of this station. It should be noted however, that another station and later, road in Laramie County was named for Edward Henry Harriman; E.H. Harriman, (20Feb1848-9Sep1909), was the chairman of the executive committee of the Union Pacific Railroad from 1898 until his death. (16)
1915 LHA: New York: 2003 miles. San Francisco: 1381 miles.
Laramie County. No tourist accommodations. R.R. station, telegraph. Drinking water, radiator water. (1)

The granite that was mined from here was used extensively for the Union Pacific Railroad buildings in Cheyenne and stone warehouses. The granite from both here and the Buford area is still being mined today; it is used as ballast material for the railroad.

Suzi Taylor in the Wyoming State Archives tells me that the cupola in front of the Granite School building may have been owned by a man in Cheyenne. The cupola came from the Capitol Building, and that it “used to “grace” [his] yard in town before being moved out to the school.” The Laramie County GIS website lists the property owner as being the Laramie County School District No. 1. (18)

18. Image captured 25May2014. I researched the Laramie County GIS website; http://arcims.laramiecounty.com prior to making the image. I obtained permission from the LCSD prior to entering the property. The quote came during a conversation with Suzi Taylor on 9Feb2015. I verified that the Laramie County GIS is still listing the owner of the building as LCSD.